San Diego, CA - StratEdge, one of the leader in the design and production of semiconductor packages for microwave, millimeter wave, and high speed digital devices, announced the release of its Power Package Series at the RF & Hyper Trade Show in Paris, France and 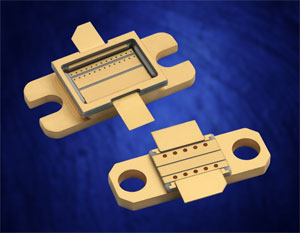 will feature them in the United States at the MTT-S show in Honolulu, Hawaii on June 5-7. The new line of packages can be used in silicon, silicon carbide, gallium nitride, and other applications for power integrated circuits. Thermally conductive beryllium oxide (BeO) ceramic give the packages excellent thermal properties.

The Power Package Series comes in industry-standard outlines. Both hermetic and non-hermetic packages are available. These packages provide superior electrical performance and incorporate copper composite bases for enhanced thermal dissipation. Hermetic packages in this series are sealed with metal or ceramic lids that have gold-tin solder preforms. The non-hermetic version is sealed with cup-shaped ceramic or liquid crystal polymer lids with B-stage epoxy preforms.

"The quality of a package's construction is directly proportional to the performance of the chip," explained StratEdge senior applications engineer Jerry Carter, who made the announcement at the RF & Hyper Trade Show last month. "Design engineers know that if they use StratEdge packages, their chips will perform to the specifications of their designs. We are used to creating packages that can handle high frequencies and high heat. For our Power Package Series, we came up with a new hermetic package construction with improved reliability that still fits the industry-standard outlines."

"StratEdge has specialized in the design, manufacture, and assembly of high performance semiconductor packages for almost 20 years," said StratEdge president Tim Going. "Several of our customers needed power packages and couldn't find the quality, reliability, and customized services available at StratEdge. The way the packages are constructed is nearly identical to some of our existing package families. The manufacturing technology is very mature and stable. We are quite excited about offering this new product line."